My color images are deeply personal storyboards, my connection to 21st century 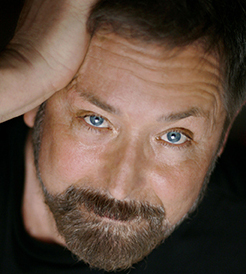 re-modernist culture. I can’t remember a time when I was not drawing and painting. I was born in Staten Island, New York City, and went to grammar school in Bayside, Queens. My first toys were crayons, fat pencils, watercolors, tempera paints, and special papers. When I was 10, my grandmother gave me a camera. While I continue to draw and paint, I never stopped making photographs.

I earned a BFA degree from Newark College of the arts where I majored in studio art. For a long time I made photographs, almost all black and white. But I would also draw in charcoal out of some frustration that I couldn’t do with film what Picasso had done in Guernica. With color photography, I experienced a similar frustration relative to the abstract expressionists. Still, I loved the processes of photography as much or more than painting, and perhaps a little inspired by David Hockney, I refused to give them up.

With the advent of digital media I saw the possibility to go beyond traditional single images into printmaking, collage and mixed media. I could conceive drawing, painting and photography in a single work. Since then, cameras continue to play a major role in my processes. But I also work with acrylic paints, charcoal drawing, and silk screen-printing. I continually scan, re-scan, re-photograph, and collage. Today most of my work is printed in editions of 11 or less using a dye-transfer-on-metal process.

My work has been featured in the Lucy award-winning journal Eyemazing, the Paris-based fine art photography journal L’Oeil de la Photographie, and the Connecticut Review. My private collectors include the actress Drew Barrymore, producers Margaret Koval and Penny Adams, and film director James Contner. In 2010, I won three First’s and an Honorable Mention in the Pollux Awards international competition, and then again a first in 2015. In 2013, I took a first, second and third in the Paris Grand Prix of Photography, and then in 2014, a silver. A network of dealers and galleries sell my work in New York, Key West, Santa Fe, Los Angeles, San Francisco, and Amsterdam the Netherlands.

Today I live and work in East Nashville, where I share a loft with the poet Stellasue Lee and our two cats, Tennyson and Caylie.