“May I ask why you are alone?  Where is your friend?”  Asked a mom-and-pop, noodle soup store owner in Tokyo concerned about my safety in the largest city by population in the world.  I was also urged to drink the complimentary buckwheat tea in order to keep the biting Siberian winds at bay.

In Kyoto, by showing a conscientious mom-and-pop, souvenir store owner the measurement of my husband, I reassured him that the extra-large t-shirt I was getting ready to pay was the right size.  Six months ago, I stopped by Japan en route to Singapore. I was excited about the stopover because I hadn’t seen my friends and relatives for more than a decade. 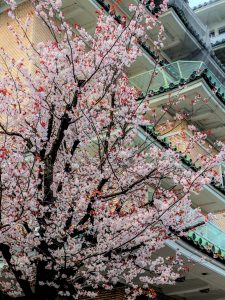 It was cherry blossom season in the Land of the Rising Sun. While foreigners were busy snapping selfies next to blooming cherry trees, or Sakura, locals were busy practicing a custom known as Hanami, or cherry blossom viewing, by having picnics with family members under cherry trees.  While exploring the old Japan on foot, my aunt Pearl who was still grieving for my uncle was brightened by a budding cherry tree tucked away in a corner in Gion. 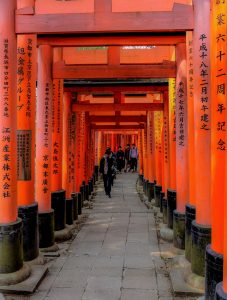 As we were threading our ways through the ten thousand entrance gates of the Fushimi Inari Shrine, I let go of my desire to capture the perfect shot in a moment of awakening. Photography like life itself is a work in progress just like imperfection is embraced by the Japanese as a way of life known as Wabi-Sabi.  I was glad that the day before I didn’t block the path or blind the sight of a geiko in pursuit of the “one” shot. 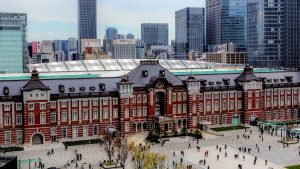 Before I boarded the bullet train from Kyoto to Tokyo, I was told by cousin Yin that good luck would follow me three years back to back if I could see Mount Fuji before I left Japan.  I felt that I was already a lucky woman when I browsed the images on my camera.  I was given a beautiful slice of spring with people I love.  I was also given a glimpse into how punctuality has made a country of 126 million people in a place the size of California running like clockwork.  While commuting between Machida and Tokyo, I gazed in awe as passengers of all ages got on and off the subway trains in an orderly fashion at the Tokyo Train Station. 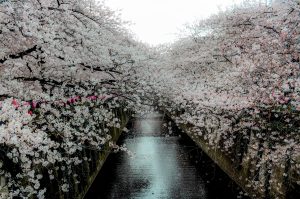 In Nakameguro, I didn’t insist on setting up my tripod so I would be able to get the best Sakura shot on the best Hanami spot.  I lined up and moved along with my friend Sachiko so the visitors behind us could enjoy an endless arcade of cherry blossoms along the Meguro River.

An archipelago consisting of 4 bigger islands and 6852 smaller islands ranging from subarctic in the north to subtropical in the south, Japan has captured the imagination of travelers worldwide not only with its diverse landscape, but also with its strong sense of cultural continuity in parallel with technological advancement.  With the past, present, and future intermingling with one another, Japan could be disorienting to first-time travelers, it could also be enchanting because of the courtesy and honesty of its people.

The Cookeville Camera Club meets on the second Monday of every month from 7:00 to 9:00pm at the First Presbyterian Church.  Join us on our photo essays night on November 11 for slideshows created by our members, each in a 5-minute time frame, narrated by member or set in music.  You may be inspired to share your stories with us someday.