A snapshot is represented by variety of different types of pictures: those found on your driver’s license and passport; pictures taken at a birthday party, of a cool location being visited to show you were there, or perhaps of your pet being cute. Now, the most famous of all types of snapshots is the ubiquitous “selfie”. Snapshots are worthwhile; they document people, places, things, and events. Virtually anyone with a camera takes snapshots, and it is fun.

A year-old report estimates there are 4.3 billion camera phones worldwide, and chances are you have one. Chances are also good that you use it to take snapshots more than you use it as a phone.   With simple-to-use technology, you just “point and shoot”, and then upload your snapshots to Facebook or email them to friends and family.

“Photographs” are different. According to Ansel Adams, perhaps the most well known photographer of the ages, photographs are “made”, not taken. I interpret his use of the word, “made”, to mean that the photographer is not merely pointing and shooting, rather the photographer is seeing something unique or highly interesting, has a vision of what the end product will be, and will make conscious decisions as how to create that vision for the viewer.

Some of the photographic decisions involve how to set camera controls to achieve the intended result. This is very much in stark contrast to allowing the camera’s internal programs to automatically determine the end result. One of these decisions involves how much of the scene to be captured should be in focus, and another decision will affect how motion is to be handled.

Three example photographs will illustrate how these two decisions were made to achieve specific but different desired results. 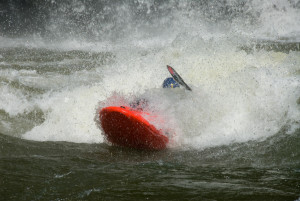 Conscious decisions to adjust the camera’s aperture and/or shutter speed begin with the photographer’s desire to do so – the desire to make a photograph rather than just take a snapshot. (These two example camera controls are available on many cameras but as of now, they are not available on billions of camera phones.) Any camera can take a snapshot, and any camera can be used to make a photograph. The difference is not in the camera, it is in what Ansel calls the most important piece of equipment, the twelve inches behind the camera!

In addition to the two example decisions regarding focus and motion, the photographer should consider many other decisions in order to “make a photograph”, decisions about what subject to capture, where the subject is placed in the frame, various ways to emphasize the subject, lighting, exposure, how to present the subject in a unique and interesting ways, whether to present the photograph in color or black & white, how to achieve a three-dimensional look, arrangement of all the visual elements in the frame, where to place the camera, what lens to use, etc.

To the degree the photographer is successful in making these decisions, sometimes in a split second, the resulting photograph can be spectacular, a work of art. It might be said the photograph has a “Wow!” factor, noticeable from across a room. The photograph may be one you would want to hang on your wall at home, or one that a magazine would want to publish.

How can you take creative control and make photographs? The simple answer, as with most learned skills, is practice, practice, and then practice some more.

Taking the first step in learning how to make photographs is the goal of the Cookeville Camera Club’s annual “Introduction to dSLR Photography” course. Basic camera controls are introduced with reading, further explained in class, immediately followed by in-class practice, and then followed by additional practice between class sessions. These fundamentals are the basis for making conscious decisions about how you want the resulting image to appear.

Learning how to create stunning photographs is a life-long effort, and we all are students. After an introductory class, the best way to continue learning is membership in a camera club, which includes numerous opportunities to practice the craft and get feedback. It is fulfilling to see progress along the way.

One thought on “Snapshot or Photograph – Learning the Difference”