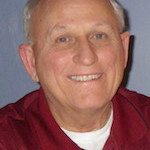 Hong Kong, a city I never expected to visit; but, one that I can’t believe I had a chance to go.

Victoria’s Peak is the highest point in Hong Kong with breathtaking views of the city, especially after dark.  The iconic Big Buddha sits on a mountaintop in an area accessible by sky gondola, bus, or an all-day hike to the top while cows can be found roaming free in the gardens at the base of the site.Many locals 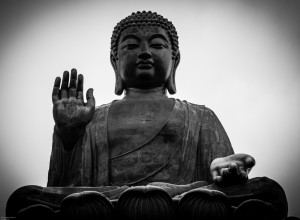 travel by ferry on weekends and holidays to visit the nearby fishing village islands where they select their dinner from the open-air fish market.  The meal is then prepared at the restaurant next door and ready to eat approximately 30 minutes later, served on large lazy Susan tables which are typical of Chinese dining. 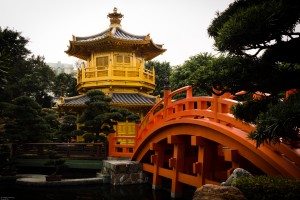 Statues of local celebrities from the entertainment industry are found in the Walk of Stars, the most popular being a bronze statue of Bruce Lee.  Near the Walk of Stars is the Peninsula Hotel, a setting for the James Bond movie, “The Man with the Golden Gun.” And, we don’t want to forget Mongkok, the flea market which is open every weekend.  Booths are set up on several city blocks going in every direction with shoulder to shoulder people.

Monasteries and gardens in Hong Kong must be the most beautiful in the world with their many gold statues.  Nan Lian Gardens includes a building with small scale models demonstrating various types wood joinery used in construction throughout the centuries.

Food choices are plentiful both in the private homes and local 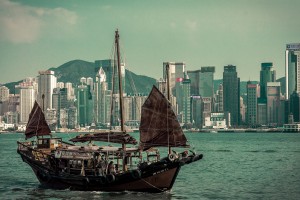 restaurants, nothing resembling the Americanized versions we are accustomed to here in the States.  An interesting custom in the restaurants is that servers are paid a wage and customers do not tip, definitely affects the service we’re accustomed to in the US.

Most of the housing in Hong Kong is government owned and the homes we visited were comparable to small apartments in the United States.  Some were two-bedroom while one was a three-bedroom occupied by a doctor’s family.  The family’s housing was downsized by the government when his wife left her government position.  During our visit, we stayed in a three-bedroom, 1200 square foot apartment owned by a British family on holiday while we were in Hong Kong.  The apartment is located half a block from Times Square, the center for business and shopping, an upscale version of Times Square in New York City.