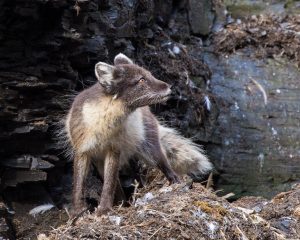 Bays along the north coast of Spitsbergen served as whaling stations as early as the 1600s. By the 1800s the whale population had been decimated and the whalers turned to seals. In less than a century the seal population was decimated as well. In the early 1900s coal was discovered on the islands and mining began and continues on a small scale today. In the 1970s, after centuries of environmental neglect, Svalbard, governed by Norway, began setting aside large tracts of land as national parks and nature reserves. As a result, nearly all of Svalbard is now an arctic wildlife preserve. No more hunting and the wildlife has flourished. Even the whales are slowly making a comeback.

Last July I joined a small ship “expedition” that wandered around the archipelago for two weeks. Each day we would load into Zodiacs and cruise around the glaciers and icebergs or go ashore looking for wildlife. The islands lie just south of the polar ice cap and we were able to cruise through the edge of the ice pack in search of Polar Bears. When we spotted a bear they seemed unconcerned about our ship and we were able to get fairly close to many of them. In fact, one of the bears napped about 100 feet from our ship while we watched. It is an awesome experience to see these bears on the ice pack, their natural habitat, and it is something I will never forget. 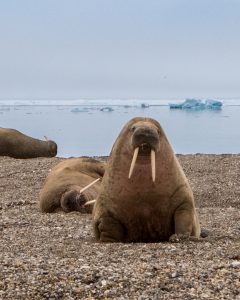 Known as the land of the midnight sun, the sun never sets in the summer and the tundra comes alive with mosses and wildflowers. Walruses haul out on gravel bars to rest. Like the Polar Bears they seem unafraid of humans. We could approach within 100 feet of them and they would look at us, then go back to sleep. They are graceful swimmers, but on land they are slow and awkward. One day we were charged by a large bull, and I mean large. The males can weigh nearly two tons.  On land even I can walk faster than a walrus can crawl, so we backed away and the bull grew tired, lay down and went to sleep.

Millions of seabirds nest on the Svalbard islands in summer. On the cliffs, there are bird colonies and these cliffs are literally covered with birds like Guillemots, Kittiwakes, or Auks. Lurking below these cliffs are Arctic Foxes waiting for eggs or young chicks to fall from the nests. Some of these birds do amazing things. Most impressive is the Arctic Tern, a small bird weighing less than half a pound, yet they migrate from the Arctic to the Antarctic and back to the Arctic every year. They fly a zigzag route and terns tagged with locating devices were found to travel more than 50,000 miles in this migration.

Cruising around the Svalbard archipelago for two weeks was an incredible experience. I went to see the Polar Bears, but found there is so much more to Svalbard. It’s not easy to get there. Beginning with a flight to Oslo, Norway, and from Oslo it’s another three hour flight due north to Longyearbyn. Take warm clothes, even in the summer and be sure to take a good telephoto lens for those wildlife close-ups.