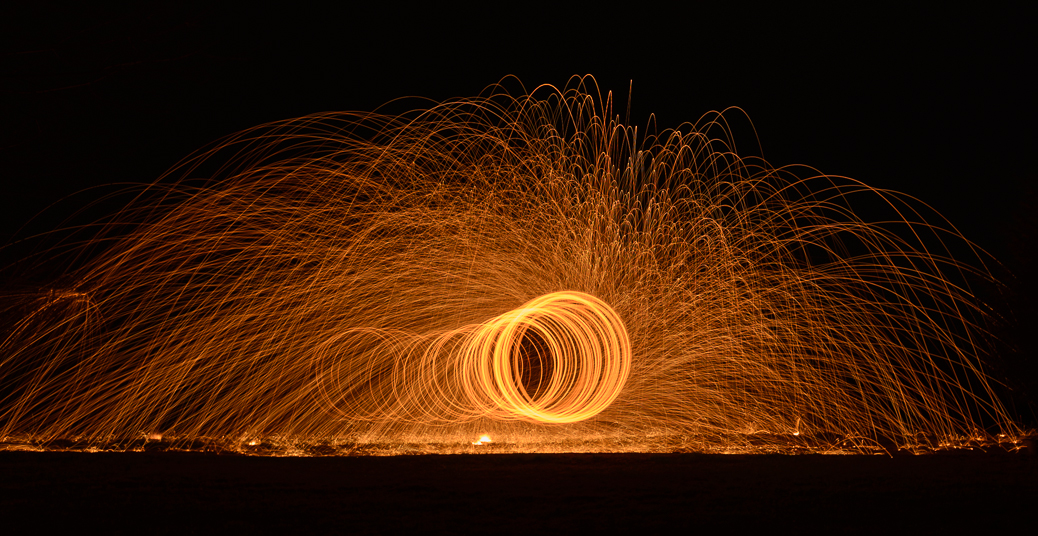 Night Photography, by definition, takes place outdoors and occurs between sunset and sunrise. It is usually characterized by “long” shutter speeds to capture dim lighting, therefore requiring a tripod for most exposures. I suppose shooting in a well-lit outdoor stadium qualifies as night photography, but that would be an exception to the notes covered here.

Night photography is also usually associated with taking pictures of the heavens – the moon and stars, but there are a lot of other possibilities, too, including cityscapes lit by streetlights, neon signs, and car lights.  An interesting fact about long exposures is that moving objects that reflect little if any light become invisible in the resulting image. We will use that to our advantage in many of the following situations.

Five CCC members (Bill & Sandy Miller, Mark Leckington, Mike Canfield, and Bruce Harrison) met at Bruce’s place in March to prepare for a club night shoot field trip in April.  The goal was to test a few fun, easy, night photography scenarios that did not require a cloudless night.

“Ghostly” images are created when a subject is not in the frame or in the same place in the frame for the entire exposure.

Shot on a tripod, you can see right through the subject because she was not in the frame for the entire 15 seconds. In this example, you can see a trace of her movement as she left the bench to her right.

Ideally this kind of image works well with dim ambient light requiring an exposure of 20 – 30 seconds. You can force a longer exposure with a smaller aperture. Experiment in terms of how long to leave the subject in the exposure – the longer, the more “burned in” the subject will be. Darker clothing helps the illusion.

There are many creative alternatives available. The subject could have turned towards the center of the bench, then moved halfway through the exposure to her left, still turning towards the center. In this case, you would have seen twin subjects (talking to herself).

Another variation would be to use a location with very little ambient light and illuminate the subject with a flashlight (light painting) two or three times and in different positions throughout the exposure (turning the light off between positions you want to capture).

You are only limited by your creativity. Practice helps.

Light painting is a technique in which long exposures are made by moving a handheld light source.  The light source (flashlight, laser light) is often used to illuminate an object that would otherwise be dark (the painting is reflected light) or the light source may directly cause the exposure.  Colored LED flashlights work well, or ordinary flashlights covered with gels would also work to add various colors.

We set up a barn  with three lanterns and a string of red LED lights for continual illumination.  By itself, this would not be “light painting.”  The johnboat, however, was painted with a blue LED flashlight during the exposure.  The painter walked through the field of view with the flashlight close up to the boat, down to the end and back (without leaving a trace).

The exposure should be at least 20 seconds.  Although the exposure on this image is 71 sec @ f/4.5 with an ISO of 100, another successful exposure was made at 25 sec @ f/5.6 with an ISO of 200.  You will need to try various settings to get the level of brightness or darkness you want.

[Advanced with Photoshop or other layered stacking software:  For large subjects, you can take multiple exposures, painting a portion of the subject (and possibly nearby objects) in each exposure.  Multiple images can be brought into Photoshop in separate layers and blended using “Lighten” to combine the images into one.] 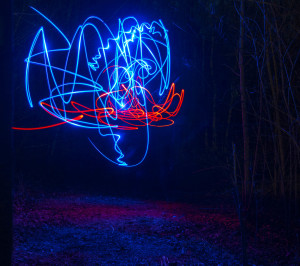 Another example illustrates handheld moving lights that directly expose the sensor rather than illuminating a subject.  Two people, each with a different colored LED flashlights pointed towards the camera, created the abstract pattern.

The following two photos are examples of a moving light and with long exposure to give the illusion of a glowing orb.  In addition to the orb, the exposures also included additional light painting elements. Both examples are a single exposures.

Because of the use of multiple

elements, longer exposures that exceeded the slowest shutter speed of 30 sec were necessary.  This was accomplished by using the “B” (for bulb) shutter speed setting.  The bulb setting is best used with a “remote shutter release”, either a physical cable or a wireless device.  The bulb setting will keep the shutter open for as long as the shutter release button is depressed.  If physically depressing the shutter release button with your finger, you may cause camera shake, even if the camera is mounted on a tripod.  A remote release, however, avoids physical contact with the camera.  It is a good accessory for shutter speeds longer than 30 sec, or in general to further minimize any camera shake.

The process for incorporating multiple elements was to expose the orb for 30 sec or so, hold the lens cap up to the lens, start up the next lighting element, then remove the lens cap from in front of the lens for an additional period, etc.

The final test was another example of a moving handheld light that directly exposes the sensor.  In this case, the moving light was burning steel wool – a trick not to be tried at home without a trained professional!  The long exposure will multiply single, rather unimpressive trails of sparks when seen by eye into a massive display of fire when capture in a long exposure!